Within the first few seconds of the trailer, I felt one singular sensation: relief. Finally, we are getting a proper sequel to Fallout 3. Finally, after the glory that was roaming the Capital Wasteland are we going back. Yes, I know there was Fallout: New Vegas but an unspoken rule of video games is that true sequels have numbers not subtitles. It was nice to visit New Vegas, but that felt like an expansion rather than a true sequel.

Thus far there have been very few details. All we really know about Fallout 4 is that it’ll trade the Capital Wasteland of D.C. for Boston. Bethesda Sofwrorks undoubtedly will have a lot to say about Fallout 4 at E3, but until then we present our wishlist of what we want.

1. Protagonists With A Voice

In Fallout 3, Fallout: New Vegas, and The Elder Scrolls V: Skyrim, you play as your own character. You name your protagonist, design what they look like. As you play you make decisions that affect the world around you. Do you want to kill everyone in the game? That’s an option. Do you want to let an entire city die? Hey, your conscience is yours, man. By nature of it being a role-playing game as well, Fallout 3 let players have very drawn out conversations with people all over the wasteland. Yet, for all the pages of dialogue in the game, your character never says a word.

It’s a design tactic in video games. Some playable protagonists talk. Think of John Marston or Commander Shepherd. And some don’t. Think every Call of Duty soldier ever. You either drive a character with their own personalities forward, or you play as a blank slate character with the idea being you imprint your own story into them.

The problem with how Fallout and Skyrim do it is that your character engages in hundreds of conversations. You choose tons of dialogue similar to the way most other speaking characters do. But while you choose the words, your protagonist says nothing. So what should be an intense back and forth ends up looking to outsiders like a mute sitting and listening patiently while a madman has long clearly two-sided conversations with himself (not unlike Garfield Minus Garfield).

Fallout 4 should have characters who speak. Perhaps Bethesda should take a page from CD Projekt Red’s book. In The Witcher 3 you can choose what Geralt says, but you also can choose his mood. When confronted by angry soldiers, do you want to buy them a drink or kill them in cold blood because you’re a badass and nobody tells you what to do? By giving dialogue options that let you choose not only what they say but how they say it, Bethesda would still give you a blank slate.

2. Dogmeat As A Gameplay Mechanic

Much of Fallout owes inspiration to George Miller’s Mad Max franchise, and the most on the wet-nosed reference is that of Dogmeat. (Though Dogmeat in The Road Warrior was a refenced to A Boy And His Dog from 1975.) In Fallout 3 you’ll come to a junkyard where you’ll meet a dog. Your first instinct may be to shoot the dog, as every animal you’ve encountered so far has treated you like your the asshole that murdered its entire family. Dogmeat however treats you the way your friends puppy treats you. It loves you wholeheartedly and wants to make you happy. You can have Dogmeat joint you as a companion throughout the Wasteland, and he can find you Stimpaks and Ammo if you ask him to. But Dogmeat was also an animal, and his poor AI meant he could sometimes pick bad times to get caught in the crossfire. If Dogmeat dies, then he would be gone. 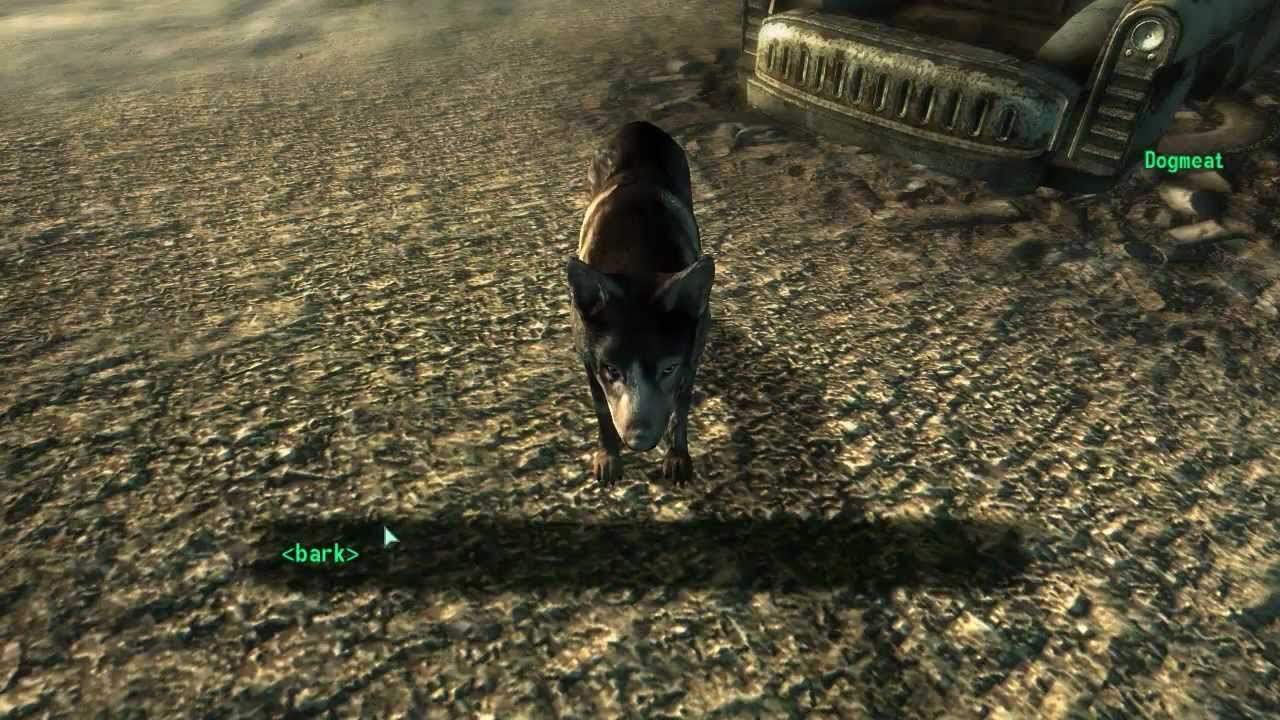 The trailer makes it clear a new Canine Companion will assist you in your travels this time around. We want to see Dogmeat 2.0 be given a bigger role. Maybe he can be like Riley from Call of Duty: Ghosts, and can stealthily take down enemies. Or perhaps he could find new quests, things you the player might miss. Or he could be the center of his own story, where you have to save him. An option to make Dogmeat impervious to enemy fire would be nice unless he can be trusted not to jump into a gunfight. Either way, we’d like to see him get more to do this time around.

This is a problem I’m currently havign with The Witcher 3, and a problem of most role-playing adventures. In most role playing games there are items you need to scour the landscape to find. Some are more rare than others. In Fallout in particular, there are a plethora of things to pick up. But not all of them are worth anything. For every lifesaving Stimpak I find, there are ten more Rusty Cans with a $1.00 value. The trouble is that certain items are so rare you may not know when you need them again. And if you don’t pick something up, you might regret not having it later. But this turns into a problem of wasting time micromanaging an inventory composed of mostly junk. In the real apocalypse, I’ll likely want to horde every useful item I can find. In my video game, I want to spend my time exploring, becoming more powerful, and shooting ghouls in the face.

Fallout 4 would do wise to have less junk in the world, and a streamlined system. I don’t need to find Apples, Chips, Bread, I’m happy with just finding Food. Managing your guns and ammo and quest items is difficult enough. But I don’t want to spend time throwing away teddy bears and toys. One of the reasons I couldn’t get into Dragon Age: Inquisition was because their crafting system was so bogged down and convoluted. Make it deep enough to be rewarding, but not so much that it drags the story.

4. Maps With Depth Not Size

Open world games are all the rage these days. And in an effort to cnvince you that $60 games with $30 of DLC are a worth investment, publishers and developers are packing open world games with so many side quests, fetch quests, and collectibles just make it clear the game is worth all that hard-earned cash you just forked over. Maps are getting bigger and bigger. Grand Theft Auto V’s map of Los Santos was 12 miles wide, bigger than GTA 4, Red Dead Redemption, and L.A. Noire’s maps combined. But the problem with maps that are too big is that players can get lost in wasting time.

Fortunately Bethesda is good at exploration. When you start Fallout 3, your map is dark. The only spots of light are where you’ve visited. But the vast majority is darkened out, begging to be explored. And you can hardly go a hundred feet without discovering something new. Sometimes it’s a Ghoul’s hideout. Sometime it’s a Merchant’s Shack. Sometimes it’s a whole new city built into a washed up Air Craft Carrier. However, with the latest console cycle, the trend has been to go bigger and bigger. GTA 5 and Witcher 3 both swung for the fences. But unless it’s done right, these massive maps can somehow feel empty, or worse…boring.

We hope Bethesda maintains their sense of restraint. Instead of giving us impossibly sized sandboxes we could spend a year exploring, give us something comparable in size to what we have. But pack it. Give us fewer cities, but more of substance to do in those cities. I’ll take 5 quests over 50 if the 5 are longer and better. Ultimately, the entire industry could take the adage “quality not quantity” to heart.

Groundhog Day By Wale, Gives You A Glimpse Into His Thoughts

Matt Stereo is a Contributor at Stereo Champions. He grew up in Baltimore before relocating to D.C. where he went to school and currently works. A lover of all things film, television and video games, he knows Daniel Craig is the best Bond, that Social Distortion is the greatest band ever, and loves a good beer.